Our Los Angeles DUI Lawyers have extensive experience at Los Angeles County Superior Court - Glendale Courthouse, where cases that originate in the City of Glendale and its immediately surrounding areas are prosecuted.

Felony DUI cases occurring in the Glendale area are transferred to the Burbank Branch of the Los Angeles County District Attorney's Office for prosecution at the Burbank Courthouse. 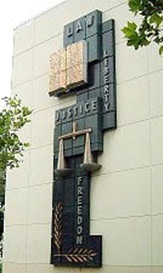 Glendale Courthouse is located at:

The first court appearance following a DUI arrest is called an arraignment. This appearance presents you with your first opportunity to plead "guilty," "not guilty," or "nolo contendere" (no contest) to any criminal charge.

Arraignments at Glendale Courthouse are most often heard in the following courtrooms:

Note that misdemeanor DUI charges do not require you to appear in person if you have retained an attorney. Our Los Angeles DUI Lawyers provide this service regularly.