When traffic collisions lead to criminal charges, a defense attorney's most important partner is an experienced accident reconstruction engineer.

On this page, our Los Angeles DUI Attorneys explain the fundamentals of accident reconstruction and why it's so important to certain DUI and vehicular manslaughter cases.

What is Accident Reconstruction?

Why is Accident Reconstruction important?

When a criminal charge like California DUI causing injury or California vehicular manslaughter is based on a car accident, an independent accident reconstruction engineer often provides the only fair analysis of what happened.

Immediately following a fatal or injurious car accident, the only people investigating it and drawing conclusions about what happened will be law enforcement- CHP or LAPD traffic investigators, for example.

Injuries and death immediately put law enforcement investigators into a mode of looking for someone to blame, even though the accident may have resulted from no particular person's fault or shared fault amongst those involved. This especially occurs in cases that involve alcohol on any level. Quite simply, car accident injuries, deaths, and alcohol prompt law enforcement investigators to make hasty conclusions about what happened and who's at fault.

The problem gets worse when they turn mistaken or distorted collision reports over to a prosecutor. In all likelihood, the prosecutor will take them at face value and file a very serious charge against a particular driver without rigorously researching the evidence beforehand.

Good defense attorneys work quickly to research the other side of the story with an accident reconstruction engineer who can provide a fair, objective, and complete analysis of an accident. This analysis will be based on science and, most importantly, explore the facts that are beneficial to the defendant.

How Does Accident Reconstruction Work? 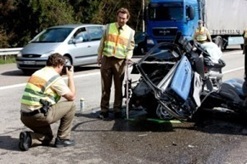 Neither is necessarily true. Car manufacturers and other organizations maintain enormous amounts of data about every car on the road, including crash test results. In a vast majority of cases, this data allows accident reconstruction engineers to discover how and why a particular accident unfolded simply by:

The results of this process commonly enable accident reconstruction engineers to produce animated films that accurately depict how an accident actually unfolded.

How Do Defense Lawyers Use Accident Reconstruction In a Particular Case?

Charges of California DUI causing injury, California vehicular manslaughter, and even California DUI Murder all require a prosecutor to prove the defendant's illegal and/or dangerous driving "caused" the car accident that resulted in the victim's injury or death.

Of course, prosecutors use collision reports provided by law enforcement investigators to prove that point. But by relying on their often erroneous and/or over-blown conclusions, prosecutors leave their cases open to challenge by more rigorous and accurate analyses.

An Example of Accident Reconstruction Adapted From a Particular Case

About an hour after drinking two glasses of wine with his girlfriend, the defendant set out to drive the group to another location.

He lost control of the car while attempting to round a curve in the highway, overcorrected the steering wheel, and collided with an oncoming car. The accident killed his passenger and the driver of the oncoming car.

Law enforcement claimed that at the time of the accident the defendant was intoxicated and driving at the reckless speed of 88mph, which led him to lose control of the car.

The defendant was charged with vehicular manslaughter.

An accident reconstruction engineer was hired to analyze the accident on the defendant's behalf and concluded he could only have been driving 57mph.

In response, law enforcement revised its claims and later asserted the defendant was driving 68mph at the time of the accident.

After the defendant's reconstruction engineer testified at trial, the jury determined that the defendant had not been driving at a reckless speed and the cause of the accident could not be determined from the prosecution's evidence.

Our Los Angeles DUI Lawyers point out that this case shows how accident reconstruction can:

If you or someone you know may be facing criminal charges following a car accident that injured or killed someone, we can help you contact the right accident reconstruction engineer in order to fight the case.